Brekete.  Played across the Savannah by the Dagomba, Hausa, Yoruba,  peoples of West Africa. Played as a support and lead drum. The head is from goat skin, and uses a snare made from thinly strung leather hide. 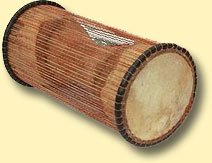 Drums are some of the oldest instruments used by west African griots and their history can be traced back to the Ghana Empire. The Hausa people (and by influence, the Yoruba people of south western Nigeria and Benin and the Dagomba of northern Ghana) have developed a highly sophisticated genre of griot music centering on the talking drum. Many variants of the talking drum exist, with essentially the same construction mentioned above. Interestingly, this construction is limited to within the contemporary borders of West Africa, with exceptions to this rule being northern Cameroon and western Chad; areas which have shared populations belonging to groups predominant in their bordering West African countries, such as the Kanuri, Djerma, Fulani and Hausa.

Made form local straw calabash woven inside to produce a hard crack for the stones sown inside.

One Reply to “Dagomba: Musical Instruments”