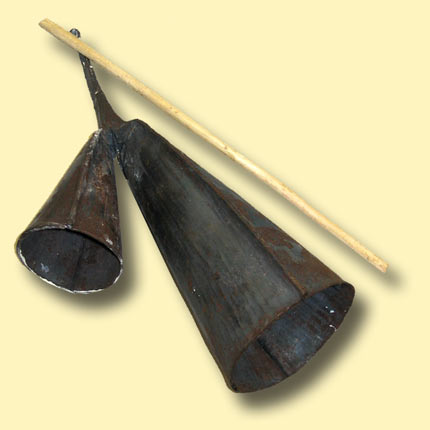 The double bell known as Gankogui in Ghana acts as the heart beat of the music.

Gankogui is the foundation of the entire ensemble. Its voice provides the metronomic background around which most Anlo-Ewe music is structured. A performer is often described as blind if he or she lacks a good sense of the guiding patterns of gankogui.

Gankogui, just like drums, is conceived as a surrogate for the human voice and imitates the manner in which the mouth produces speech. It is played with a stick technique while held in one hand and resting on the thigh of the performer who sits on a short stool with a firm relaxed body. The stick is swung as the hands go into motion supported from the elbows. The actual swing of the hand is done from the wrist. The stick is struck on the full rounded portion of the bell to achieve the best resonance. When the top high pitch is in use the forged-iron structure rests on the thigh and when the larger low pitch is in use it is raised slightly above the thigh. Stopping the resonance of the lower pitch after is is articulated by damping it on the thigh is equivalent to closing the mouth and provides the means of indicating the basic motives, phrases and periods out of which gankogui music is made.

Be the first to review “Double Bell” Cancel reply