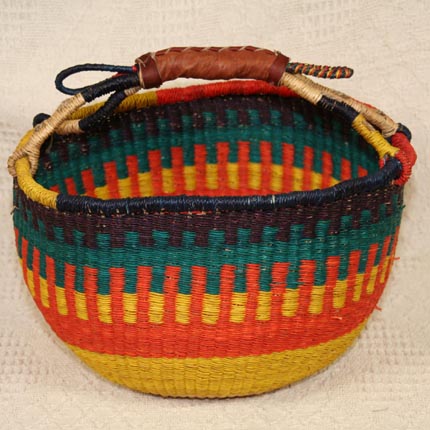 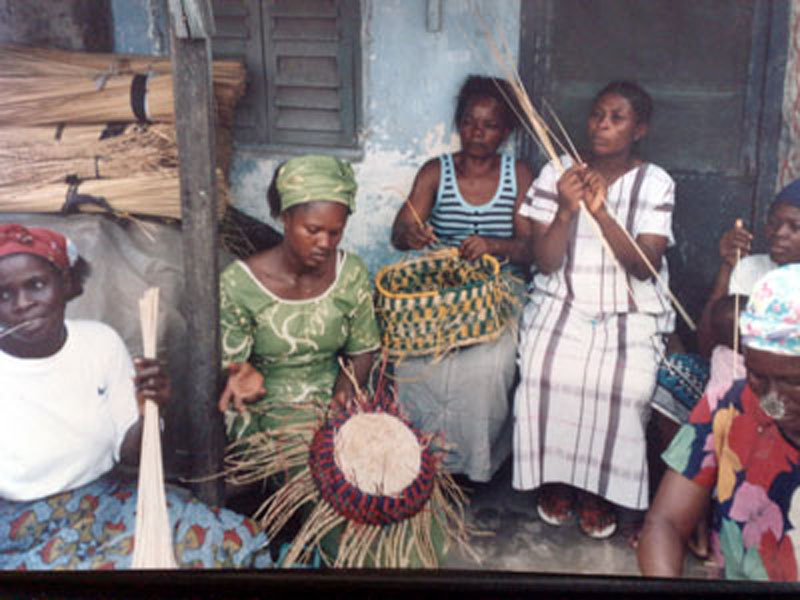 To weave a basket the straw is first split with the teeth in two sticks, then twisted on the leg. The twisted straw is dyed in hot water and a small pot with batik dye. For weaving a basic cross is made out of strong (undyed and untwisted) straw. Around this cross the uprights are set up and added and the round are woven. So a basket with relatively strong but flexible texture is made.

Two types of weaving are done (and most weavers only know one of them): It is double weaving (two uprights and thin straw) and single weaving (one upright and thicker straw). If the basket has reached its size a mouth has to be done. Here uprights are combined and bundled round. The handle is woven inside that mouth, is combined in the middle and bundled round with straw. The end of the straws on the baskets are cut with a blade. The TEA is ready.

Now there is till the leatherwork to be one on the basket: The handle is sawn around with goatleather, which increases the comfort of carrying a basket and also increases its stability and durability.

In north-east of Ghana, near to the border to Burkina Faso, Bolgatanga is situated, where the Frafra are the original settlers. (Scientifically spoken the Frafra are a larger ethical group, and the weavers belong to the smaller tribe of the Gurunsi. In Ghana however the weavers call themselves Frafras.) In this area about 120.000 people are living and not in every house or compound families or villages weaving is a predominant vocation.

Whilst agriculture – despite the poor soils of the Sahel zone – is the major occupation (millet, guinea corn, maize, groundnuts, beans, cattle and animal rearing) about 4000 people do weaving as a part time or even full-time occupation.
Most of them however see weaving as a side or additional occupation, as agriculture for self-sufficiency is their major profession. During the main farming season, weaving is neglected a little to give enough time for the harvest.

Out of the 4000 weaver we from Fairtrade Producer Society (FPS) co-operate and work together with 980 (survey and group registration 2002). They are from three villages: Gambigo, Nyarga and Sumbrungu.

In the individual compounds the weaver groups are organised like a family is together. To the outside, meaning towards the market and also our man Abu Sadik or Accraboy they are represented by their leaders. The Leaders – different for men and women – are the link to the market and are selected from the groups (families, between 5 and 30 people) themselves. Theirs is a service function: negotiate price, collect straw, collect money, transport baskets and straw, serve as communication link, such as orders, quantities, colours, style.  In case of discrepancies the leader is sacked.

Accraboy is co-ordinating the orders of Getrade-FPS, and is sending the ready baskets to Accra. His duty – apart from co-ordination, colour selection, weaver’s selection and their quantity of orders, and the first quality control – is definitely payment of weavers and the organisation of basket transport from the villages. Also he has the storage in his house, as well as the straw storage and also the leather makers and their leather. The leather is made as per piece in his house. Also he sells the rejected baskets at the Arts Centre in Accra, where he still has a store, like he opened it in 1986.

Prices however are fixed with the weavers by Getrade-FPS through discussions in the meetings with the weavers two times a year.
Payments to Bolga and also to the weavers are strictly before at collection, with a prepayment (and a straw distribution in the lean season) for straw and dye.

Since the 50th the TEA (spoken Te – A ) the basket with a handle is produced in Bolgatanga.
Bolgatanga is the capital of the Upper- East Region of Ghana. Here is the Sahel Zone the predominant agricultural grounds, with its dry season and heat for over 6 month a year. Between May and September there are and millet, maize, and groundnuts are planted and harvested.
During this time weaving is only done in the night, most time is spent on the farms. In the dry season of the year however a lot of baskets are woven.

An average of four baskets a week can be done by a woman, who has her housework, firewood collection, water bringing, washing and children care during the whole day. So she can achieve an additional income of Cedis 16000, which is equivalent to 4 kg of millet, which is the basic stable food in the region. (Figures 9/99).

Every man/woman is working on her/his own basket. They buy their own straw, and mostly dye it alone, twist it themselves and weave each a basket. For weaving they sit in their house or compound on the floor or under the tree. Mostly weavers work alone, or in small company, hardly in huge groups.

With the high volumes of production, one can see the area of Bolgatanga, where the Frafra weavers are farming and have Basket weaving for income generation, is developing and changing gradually:
Whilst the state rehabilitated the road to Bolga and the District Assembly put up a new Market area, private investment has also followed into the Region, such as FM Radio, transport enterprises and service workshops. Within the last ten years Basket weaving has attributed to the upgrading of Bolgatanga and the Region.
Despite the fact, that Basket weaving is mainly a part-time occupation the permanent market for Baskets  made  it possible for weavers to improve their livelihood in their villages and compounds: more permanent structures are put up (cement and roofing sheets), household utilities are bought (LPG Gas cookers, Radios) and bicycles and even motorbikes are in many compounds.

Women and men are working separately in the Basket weaving. They organise themselves, around their compounds into groups, who have a group leader. The leaders are responsible for contracts and Sales; however prices and incomes are discussed and shared within the group.

Be the first to review “Bolga Basket” Cancel reply